The API Quality Platform for DevOps
and Agile Testing

The ReadyAPI platform accelerates functional, security, and load testing
of RESTful, SOAP, GraphQL and other web services right inside your CI/CD pipeline.

Ensure End-To-End Quality For All Of Your Web Services.
Four Powerful Tools. One Intuitive Platform.

Generate load, stress, and spike tests to validate whether your API can handle real-world traffic conditions.

Secure your vulnerable APIs from XSS, malformed XML, SQL injections and more with each deployment

Remove dependencies in your testing pipeline by virtualizing RESTful, SOAP, TCP, JMS, and other web services.

Instantly Validate Your Entire API In Just A Click

The new Smart Assertion feature in ReadyAPI automatically creates validation and assertion points against your API. And it gets even smarter over time, intelligently recognizing dynamic values that change and adjusting assertions. ReadyAPI allows you to build complex end-to-end functional, security, and performance tests with both the ease of an intuitive interface and the flexibility of an IDE.

Whether you are using static build servers or dynamic, cloud based platforms, ReadyAPI has an exhaustive range of integrations into automated environments of any type. 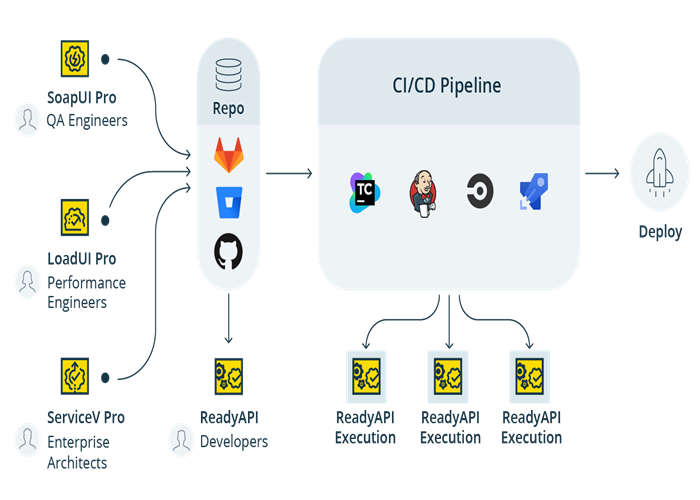 TestEngine is an optimized test runner for automating SoapUI and ReadyAPI tests at tremendous scale.

Find Out How TestEngine Can Accelerate Your API Testing Process

Drive Real-World Data Throughout Your Testing

Using realistic, dynamic data in your API tests is critical to covering boundary conditions, positive/negative testing, and truly simulating the way your consumers interact with your APIs in the real world. ReadyAPI not only has a insightful dashboard built in for quick up-to-date testing metrics, but also outputs JUnit, HTML, CSV, or other customizable reporting formats. You are replying to :